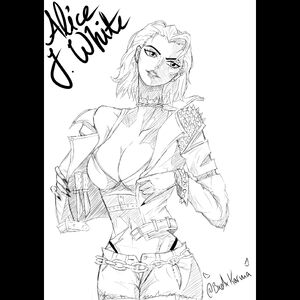 She was a known singer traveling around the world and spreading her music and great charisma, doing that so much that the government overlooked her, at that time, little criminal activities. Thieving was what she was also good at, very good some might say.

Not much is otherwise known about her, her real name was not known until after the great war.

The crew BlackBlood is feared due to their "immortality" how some might call it. The crew is known as one working under kaido after the two years and is feared due to the crew members of which only two are known for not having a devil fruit and none of them being a smile.

It is unknown how it turned out to be that way that the woman with the strong and beautiful singing voice went from the love of many people to the fear of many. The Marines are also torn about it since they have put a bounty on her head but never directly send Marines to hunt her down since her image amongst the world is still living and it might ruin their own.

Her first known appearance is on sabaody where she was having a show before the war and met the strawhats, heart pirates and kid pirates. Some would say they noticed how she got closer to the kid pirates where the reason to that are unknowns though. But rumors were spreading.

Alice grew up on an island in the North Blue,

Other characters that know this character are...

This character appears in these episodes...

"Here's a thing this character said!"

Did you know that this character...